Cyril and Methodius
Cyrillic is named after Saint Cyril (827/828 to 869 AD). He along with his brother Methodius (815 to 885) were Byzantine Greek monks and began their careers performing missions for the Patriarch of Constantinople. In 862 AD the brothers were sent to the Slavic state of Great Moravia by the Patriarch of Constantinople at the request of Prince Rastislav in order to spread Christianity. 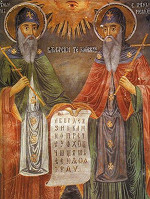 Cyril and Methodius
As part of their mission they undertook to translate the Bible into an old form of Slavic now known as Old Church Slavonic. 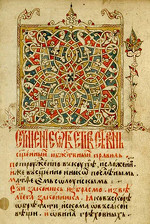 Early illuminated manuscript
Cyrillic Script and Modernisation
After the death of the two brothers their works continued to spread throughout the Slavic speaking regions. Sometime around the 890s scholars of the First Bulgarian Empire at the at the Preslav Literary School created Cyrillic by combining elements of the Greek and Glagolitic Alphabets. It was this script which became the dominant alphabet for a variety of Slavic languages.

The early Cyrillic Alphabet had over 40 letters in it but some of the letters fell out of use, partly as a result of "modernization" by Peter the Great (1682-1725) who also introduced the concept of Upper and Lower case letters to the Cyrillic Script.

In addition, following the Bolshevik Revolution of 1918, the Russian Academy of Science decreed the elimination of 4 more letters, leaving us with the 33 letters used in modern Russian.
<< Back to lesson
PLACEHOLDER