Up until the 15th century Korean was written entirely using Chinese characters. Since this required learning several thousand complicated characters only those with lots of time and money for education were literate and only a tiny number of aristocrats were able to read and write fluently.

In 1446 the fourth king of the Joseon Dynasty, Sejong the Great, published a document called Hunmin Jeong-eum Eonhae that described a new alphabet (Hangul) that was specifically designed to be easy to learn. 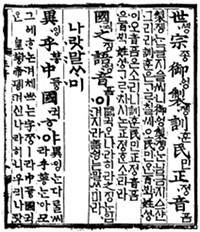 Hunmin Jeong-eum Eonhae written using Chinese characters as well as Hangul
Hangul was very successful in spreading literacy to women and the undereducated but was resisted by some scholars and elites who saw it as a threat to their special status and who insisted that Chinese characters were the only legitimate writing system. In fact it was so successful that it was outlawed by the Tyrant King Yeonsan-gun after commoners made hangul posters mocking him.

After his death Hangul made a comeback, often mixed with some Chinese characters.

Mixture of Chinese characters and Hangul written verticaly
Hangul was also banned once again in Japanese-occupied Korea right before the beginning of World War II in an attempt to make Japanese the official language.

As soon as the war ended Hangul once again became the official alphabet. Like before, Hangul was often mixed with the Chinese characters. However, starting in the 1980's, the use of Chinese characters has mostly disappeared in South Korea except in scholarly documents. Hangul now reigns supreme.
<< Back to lesson
PLACEHOLDER