Lesson 2: Origin of the Kanji

﻿The Kanji (漢字) are Chinese characters introduced to Japan via Korea around the 5th century. In fact Kanji literally means "Han Characters". The exact date and origin of the Kanji in China is still a matter under research but they definitely existed before the 15th century BC making them the oldest writing system still in use!

The earliest group of inscriptions with many surviving examples are known as the "Oracle Bone Script". These were inscriptions done on animal bone or turtle shell in the Shang Dynasty from the 14th to 11th century BC. Diviners would write a question on a bone or turtle shell, heat it over fire till it cracked, and then interpret the meaning of the cracks.

As time went on the characters became more refined and were inscribed on bronze. Here are examples of a Bone Script inscription circa 1,400 BC and a Bronze Inscription from 825 BC:

Earliest Kanji
The earliest Kanji were pictographs just like the Egyptian and Mayan hieroglyphics. Over time though many were simplified and simpler characters (radicals) were combined to represent more abstract ideas.


Introduction to Japan
Imported luxury goods from China with character inscriptions have been dated to the 1st century AD but the Japanese probably had no way to read them. The development of literacy in Japan is thought to have started in the 5th century.

Initially Kanji were used in Japan exclusively to read and write in Chinese which limited its use. Over time however the Japanese developed several systems to write Japanese using Chinese characters. One way was to assign Kanji a phonetic value and transcribe the phonetic reading of native Japanese words using Kanji. The other was to assign an existing Japanese word to a Chinese character with a similar meaning. At the same time many new words were being introduced from China and these would generally keep a variation of the original Chinese pronunciation.


Development of the Kana
Several different systems developed to map a single Kanji to a specific syllable. Two of these systems survive to this day in simplified form as Hiragana and Katakana. 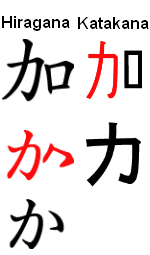 In some cases both systems used the same Kanji for the same sounds but the resulting stylizations are completely different. An example of this is "Ro" where the Hiragana ろ and the Katakana ロ both come from the Kanji 呂. The Hiragana is a cursive representation of the entire Kanji whereas the Katakana is a blocky version of just the top half. 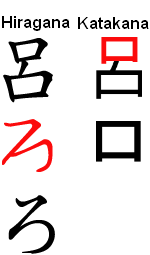 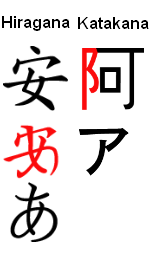 Readings
There are two kinds or readings (i.e. pronunciation) for Kanji. The first is the On-Yomi (音読み) which is the Japanese approximation of the Chinese pronunciation. In Chinese each character only has one reading, however different dialects use different readings. As the Kanji were introduced to Japan over hundreds of years the readings from different dialects came to be used so that one character can have multiple On-Yomi.

The second kind of reading is the Kun-Yomi (訓読み). This is when the pronunciation of a native Japanese word is assigned to a Chinese character with a similar meaning.

One of the challenges of Kanji is that a character can have both On-Yomi and Kun-Yomi and also often has multiple readings for each type. As you'll learn later though, the context the character is used in will give you hints on which reading to use.

<< Back to lesson
PLACEHOLDER